Turbines installed and connected to the grid 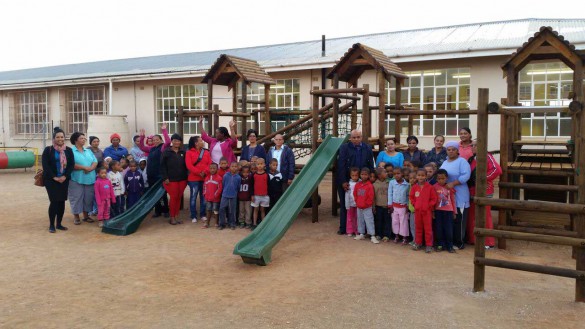 On receiving the apparatus the Early Childhood Development Practitioners expressed their thanks and commented on the children’s tremendous excitement about the new gym. “We are grateful for the new equipment that our learners can play on, so they can develop as a whole; their excitement is contagious,” they said.
Jungle Gyms are internationally recognised by occupational therapists as the best form of developmental play structure for young children. They help in the development of Gross Motor Skills, which is defined as movements of the large muscles in the body such as the arm and leg muscles.

“In addition to replacing the jungle gym, we are pleased that we were able to recruit three local labourers to assist in the assembling and installation of the jungle gym,” concluded Mainstream.

We use cookies on our website to give you the most relevant experience by remembering your preferences and repeat visits. By clicking “Accept All”, you consent to the use of ALL the cookies. However, you may visit "Cookie Settings" to provide a controlled consent.
Cookie SettingsRead MoreAccept All
Manage consent

This website uses cookies to improve your experience while you navigate through the website. Out of these, the cookies that are categorized as necessary are stored on your browser as they are essential for the working of basic functionalities of the website. We also use third-party cookies that help us analyze and understand how you use this website. These cookies will be stored in your browser only with your consent. You also have the option to opt-out of these cookies. But opting out of some of these cookies may affect your browsing experience.
Necessary Always Enabled
Necessary cookies are absolutely essential for the website to function properly. This category only includes cookies that ensures basic functionalities and security features of the website. These cookies do not store any personal information.
Non-necessary
Any cookies that may not be particularly necessary for the website to function and is used specifically to collect user personal data via analytics, ads, other embedded contents are termed as non-necessary cookies. It is mandatory to procure user consent prior to running these cookies on your website.
SAVE & ACCEPT